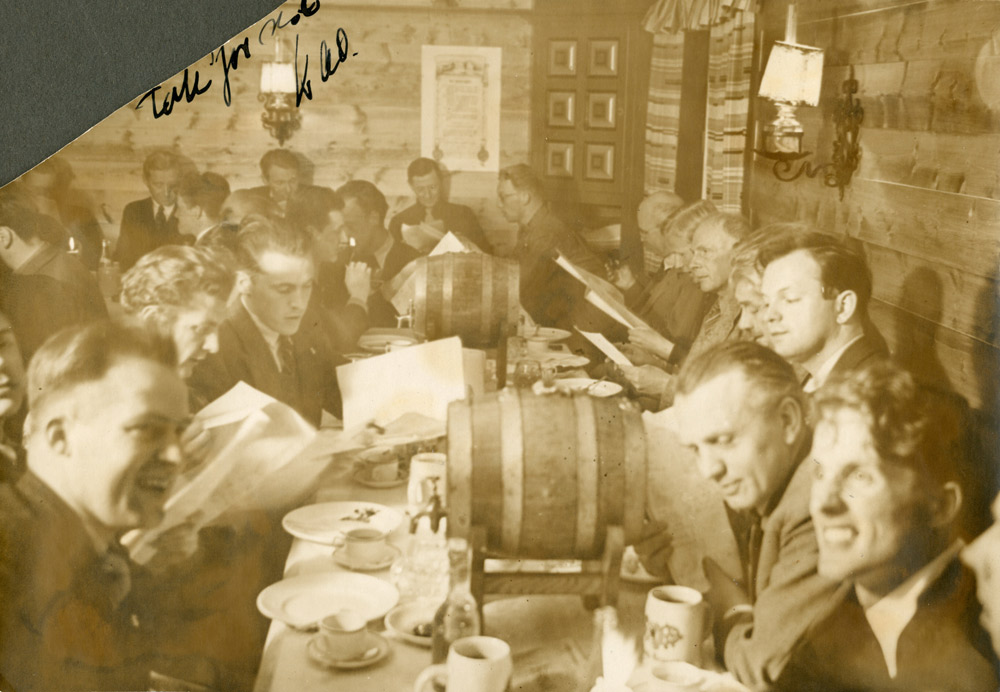 After His Majesty King Haakon VII officially opened The Norwegian School of Economics on the 7th of September 1936, the students soon found out they needed to do something else beside their studies. Only four days later, the students gathered in Klubben and established a student council. This council was meant to function as a link between the students and the school. One week later, on the 16th. of September, the student association at NHH was founded. Odd Viig was the first to be selected as chairman.

Foreningsmøtene (The General Assembly) were held in Klubben the first few years after the foundation. As early as spring 1938, a student orchestra was started. The members of the orchestra kept it going a couple of years until the outbreak of the Second World War in Norway. In addition, more groups were started, such as a club committee, a sports committee, a trainee committee, a cabin committee and a student office.

Assosiaction for the creation of ”Norges Handelshøiskole” in Bergen built and endowed the student cabin, Kramboden, to NHHS in 1937-38. Naturally, “The father of NHH” and president of the Association, Kristoffer Lehmkuhl, took part in the inauguration festivities in May 1938, at the age of 82!

After the war, Bergen developed as a student town. The university opened in August 1946, and earlier that year, the first student revue was shown in Bergen – ”Ta Tonen”. This was the very beginning of UKEN , and it was a collaboration between NHHS, Student Society in Bergen and Active Students’ Association (ASF). The name ”UKEN” appeared throughout the 60’s as the event grew. After NHH moved out of the city in 1963, and the politicization of student groups at the University of Bergen soured most of the collaboration, and UKEN went bankrupt in 1972 after a scandalous revue – ”Dryl’an”.NHH’erne allerede gitt opp UKEN, og isolert seg mer i sitt stadig ekspanderende miljø i Helleveien.

As his father before him, His Majesty King Olav V also got the honor of opening NHH. This re-opening took place October 28th 1963 in Breiviken. Minister Lehmkul had always fought to get the school located there. This was the beginning of a new era of NHHS. Svæveru’, the man choir at NHH, was revitalized and given the form we know today. When the King and the Crown Prince arrived at the opening, ”Direksjonsmusikken” played for the first time. Klubben was opened the next day, and it started to take shape as a night club. 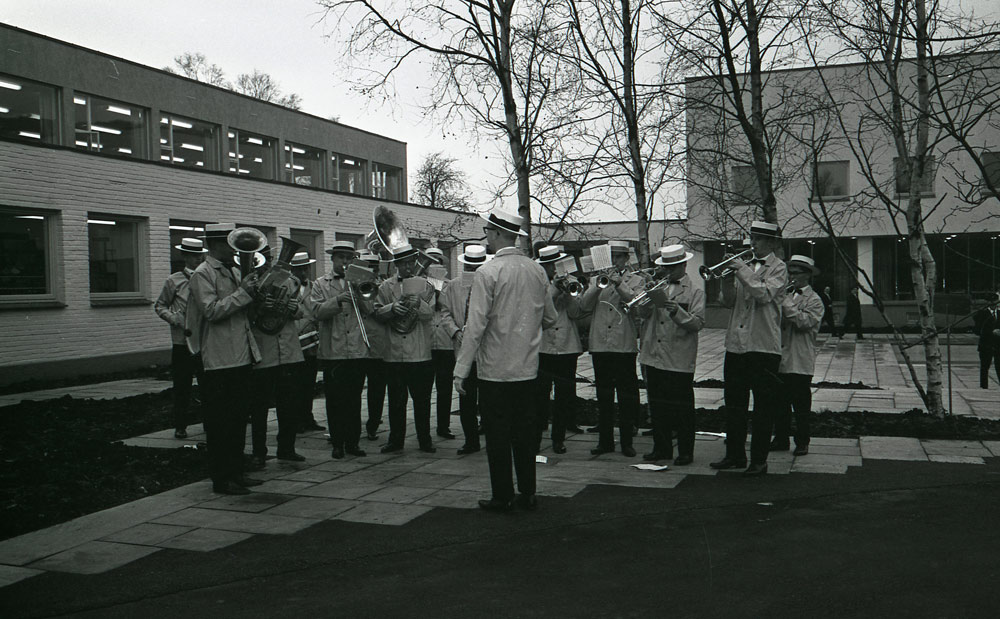 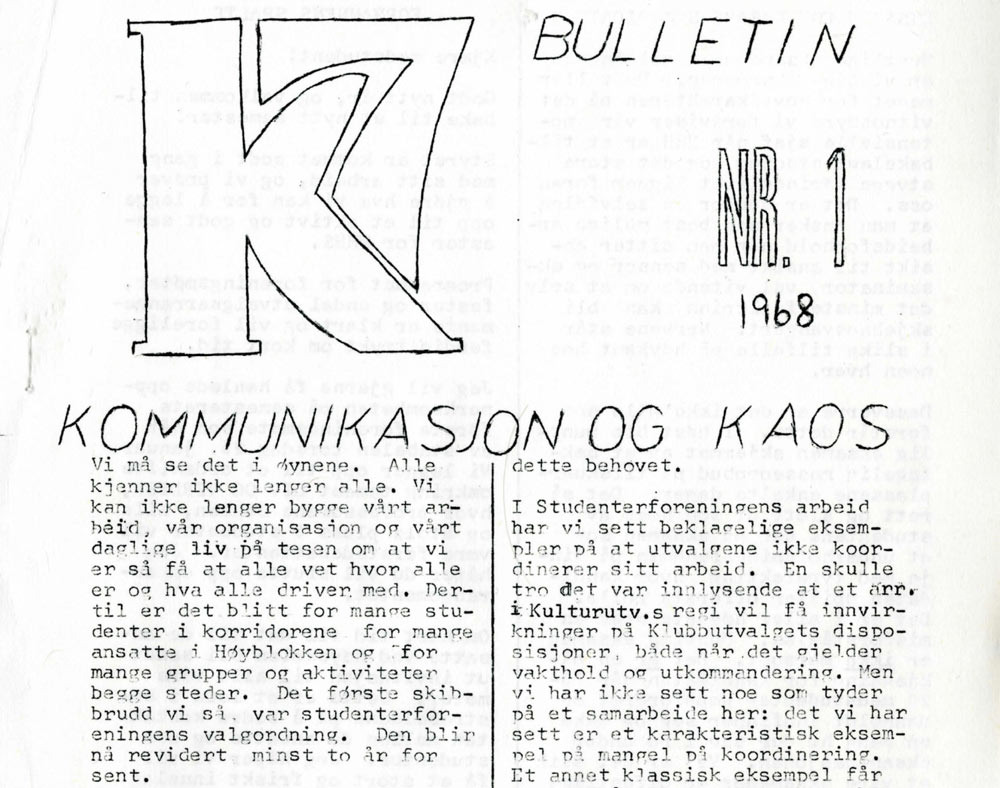 The activity in NHHS increased in line with the number of students throughout the 60’s. Hatleberg dormitory opened in 1964, and it was a very popular place to live. In fact, students had to be on a waiting list for several semesters before they got a room there. In 1964, the school magazine K7 was published for the first time. From 1968 this was supplemented by a weekly publication that we all know today – K7 Bulletin, or “Bulle”. The name of the paper stems from a NHH legend: The legend of the eternal NHH student K. Syvertsen (not Kåre Syversen as many mistakenly believe).

There were also other groups that started in the 60’s, among others EKKO (today known as NU), The Shipping and Transport group, The Photagraphy group, the Cultural Commitee, and ”Oktetten” – the second choir at NHH. In addition, there are other more or less viable groups that have contributed to NHHS, like Temporary Bachelor’s Society, The Trondheim Battalion and Donald Duck Club NHH.

Both the Administration and NHHS’ growth continued in the 70’s. The MBA course increased to four years in 1975, which gave room for students to increase their engagement and heavier duties in the student union. The students were also protesting. There were both rent protests and general protests against the fact that student reading places were moved to the Merino building. Going up and down to Merino several times a day was simply not feasible! We all know the result of that protest, though… “Hangaren” down at the Merino building is a concept today, that counts for the NHH student’s infamous thigh muscles. Maybe that is why NHH usually win the annually relay agains BI?

Economically speaking, NHHS mostly managed to keep their head above water. There never was a large monetary surplus, but the student union would still allocate some money for political purposes through The General Assembly. The most famous case, is probably the 1002 NOK NHHS sent to the protesting miners in Kiruna in 1969. It was also at this time the big parties in Aulaen began to take form, including ”Internaften” – a show with the purpose of raising money to charity.

In October 1978, a bunch of students met at the “shelf” in the Aula and made an effort to resume the studentUKE tradition in Bergen. In March 1980, UKEN was arranged again, but this time the NHH students wanted the event for themselves. It was easier that way and that is how it works today. UKEN gathers around 20.000 visitors every second year too watch the revue, concerts and many small and large events. As a former UKEleader once said: ”It’s a 17 days long orgasm”.

Three years after UKEN 80, another big event arranged by NHH students, NHH-Symposiet, was started. NHH-Symposiet is a conference arranged every second year. Already after the first Symposion in 1983, NHH-Symposiet could boast about having Kåre Willoch (The Prime Minister) holding the opening, and SAS-President, Jan Carlzon, mentioned Svæveru’ in his speech at the conference.

NHHS has so to speak its own music institution, but a lot happened during the 70’s and 80’s. Several choirs ended their careers in NHHS, among others ”Oktetten”. Shortly after, however, new choirs were started: Pikekoret Sangria (a girls choir), UKEkoret Optimum (a mixed choir), and Big Business Band (BBB) was started in 1983, and they are all present in NHHS today, along side other groups in the basement, such as Technical Group (TK), eXtravadance, Svæveru’ and Direksjonsmusikken. 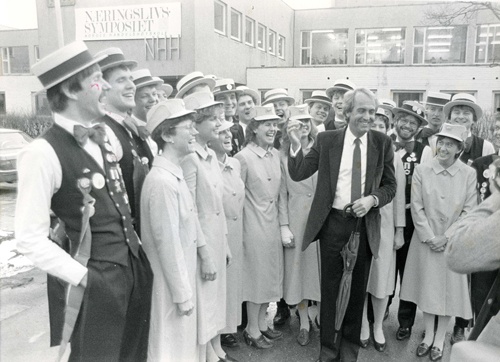 The development continued during the next decades. The common denominator for the new additions to NHHS in the 90’s, were first and foremost that they were technology driven, and filled the missing functions in the student union: The IT group, Grapfic NHHS, the Information Comittee, and tv channel K7 Minutter are some examples. In the beginning of 2000, Næringslivsutvalget (NU) took the position is has today as the student association’s most stable source of revenue. The cashier in NHHS is today managing a fortune thanks to Norwegian companies extreme hunger for NHH graduates. The rapid technological developments have led to a further professionalization of the student association. Combined with a rapidly increasing number of students, NHHS now grows in all directions, both in the number of groups and the number of members in each group.

Now, 75 years later, the activity in NHHS is higher than ever. Currently, the association counts 27 comittees and 70 + interest groups. There are somewhere between 1200 and 1800 students in the student association today. All the way from serious groups like Global Economic Perspectives (GEP) and NHH Aid, through a wealth of sports groups such as lacrosse and hockey, to more peculiar clubs – the student association has an offer for each and everyone. The activity is high, and queues are long. Everyone wants to be a part of it. What started out as a handful of guys in a basement 75 years ago, is today a million enterprise with a lot to offer – NHHS is therefore rightly called the most active student association in Norway!